A book within a book 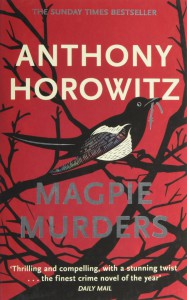 The way it is set up is pretty clever.

There is a crime writer who had sent his latest manuscript to the editor. The editor is reading it with the reader.

On the 60% of the book, it stopped. The final chapters are missing.

So the editor in the book starts to find out the chapters. In the meantime, the writer died, suspected of suicide.

The way the book setup is good. The problem is, I don't really care much for the characters. The supposed crime book, is about an aging detective and his young sidekick on a case where a housekeeper was found dead. And then a week later, her employer was murdered.

It read like a BBC mini-series, a period piece with horse driven carriage and women with hats.

The later part read more like an Agatha Christie mystery.

The last chapter is the real writer, Anthony, interviewing the fictional writer. I like the setup and the story run pretty smoothly. So if anyone like those things, this could be a 5 stars read. For me, the characters are not likable. And I need to like them to enjoy the book more.

I read this for New Release square.