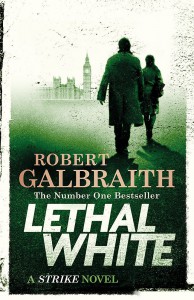 The second reading of this book is even better.

Some readers don't like it to be that long. Totally understandable. On the other hand, I like the details and slowly revealing the clues.

The main character is the Minister of Culture in UK during the Olympic games period. He was blackmailed and hired Strike to investigate who and try to stop it.

Strike also got a mentally disturbed person coming to his office seeking help saying there is a child being strangled.

Robin and Strike has hugged at her wedding. Then she went off to the honeymoon and stayed in her marriage. Strike is not too happy about that as he has feelings for her that he barely admitted to himself.

Matthew, Robin husband is a self absolved jerk who don't really care that much about Robin beyond her beauty. He belittled her and try to get her quitting her job which he deems too dangerous. Robin is suffering from anxiety attack since her last encounter with the serial killer who knifed her.

Strike being the way he is, hooked up with a woman and even loved him.

Read like a romance at some point and it is both juicy and distracting.

Robin was sent going undercover to the House of Commons to put in listening devices that is certain to be illegal.

Of course, that would help to gather clues to find out some dirt in another Minster who is more likely to be the one who behind the blackmailing.

The current wife of the Minster is a bitter woman who like horses. The elder son was killed in service to his country and the younger son is a playboy who killed a woman in a DUI.

Finding things out is a process.

Robin made some good progress and did some mistakes also as she is still green in the field.

She found a clue, about how the girlfriend of the Jimmy, who are out to hurt Minister, in the most unlikely places.  She also found a clue regarding her husband.

The confrontation between Robin and Matthew is pretty tense. As it setup like a domestic violence scene.

The plot twist is pretty good as well.