Artemis is an adolescent crime genius 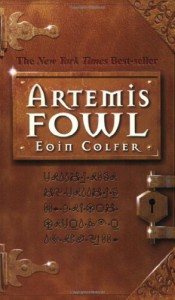 Artemis is 12 yr old and want to kidnap a fairy for ransom.

Holly is a fairy, equip with powered-wings for patrol. There are mud people (humans) who live in the above world.

It is just by chance that Holly met Artemis and was captured for ransom. Artemis want fairy gold to re-start the family empire. His father is missing and his mother is fallen to madness. There is no telling what's going through his mind. Artemis was aided by loyal body guard Butler and his sister.

Once the readers get past there is fairy and magic in the below world, the story goes like a die-hard movie, with master mind villain having hostage for ransom, and the team of fairy who want to save the hostage and punished the villain.

It is hard to make a 12 yr old a villain. No wonder this series is so popular. It is a fun read and the story move very fast with both sides taking actions and it seems wild and fun.

Might read the next one. It is pretty good.