David is being on-loan to MI5 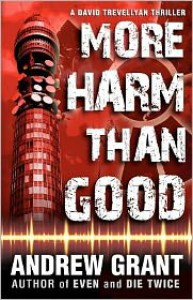 David was in the hospital. He was there because he was being hit on the head one too many times. While he was there, he needed to rest and didn't checked out of the hospital by himself.

A thief came to his room and stole his boots. He likes his boots and wants them back. So he tried to catch the thief. He did met someone else and he knocked him out. The thing is, this guy was working for MI5.

So... his left one agent partner-less. He was then ordered to stay longer in the hospital to help out this agent. There was some highly radioactive stored near the hospital. The agent got news that there is a danger that someone would steal these radioactive materials that could be used as poison or dirty bomb.

The running around is a bit strange. So who is the bad guy here?

There is some actions and some plot twists. It is an OK fun read.