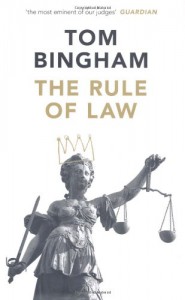 If you like the "rule of law" or have ever use the term in your sentence, then this book is for you.

The rule of law is more an assumption rather than a clear statement of what it is really.

Tom Bingham, being a judge for so many years, use his expertise in his learning of the history of the law, and the use of the law in Britain and in Europe, to write this little book on what he think it means when we say rule of law.

The first two chapters are background and history and I like them already.

The third chapters goes into the nature of the law. The British government being so fast in many laws that even the judges, counsels and law people involved are not sure sometimes about the law.

I should go back and do some citation.

How rights are being protected under the law.

We assumed that privacy is being protected. I thought we are saved from the government reading our online email and other information. Not so. Privacy is not a right being able to handle under common law. It has to be legislated so that this right is protected.

Also, religion as a private practice is protected. But once it is out, and it interfere with other person's right. Like human sacrifice, child abuse practices, no matter how strong the religious belief, it is not allow by law. Religious right is not an absolute right.

The important of fair trial, and how fast one is being scheduled to have a day in court, to presentation of evidence so that the person would have make an adequate defense is so important in the rule of law.

Even in cases of release of mass murderer after 30 year of being in jail, to suspect terrorist under house arrest, the law is still the law. And withholding evidence would not cut it.

The uphold of principle is so important and this chapter kind of put you in the mind of the judges and how the rule of law is the ultimate principle to be upheld.

Chapter 11 Terrorism and the rule of law

The rule changed after 9/11. The Bush administration use fear.

UK has always deal with terrorism as a civil emergency instead and not a war.

It is not a good way.

Chapter 12 The Rule of law and the Sovereignty of Parliament

This is interesting. The Sovereignty of Parliament means that the House of Commons could actually make any law it see fit, even if it is against the rule of law as it was described in this book. But that is up to the British people.

A must read. But read slowly. And like me, if you are not familiar with the cases, he will tell you the base story.

To further understand this book, look the the quoted laws, and the cases.